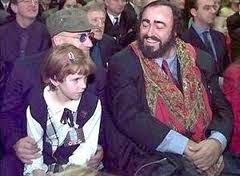 Time for another excerpt from my forthcoming book,  Left Field.  Luciano Pavarotti arrives to open the music centre in Mostar.

Weeks earlier, children had decorated the art room with their hand prints. Hearing about this gave me the idea to have Pavarotti and the other celebrities place theirs under the tablet we had had made commemorating the opening. I'd arranged for two trays of green paint to be prepared for this. When Pavarotti’s head of security saw the children standing at the side with the trays, he told me that the last time this had happened was in an Italian school and the paint had ended up on Pavarotti’s clothes.

I ordered the paint ceremony to be cancelled but, to my horror, the two children were already stepping through the crowd just as Pavarotti, Bono and Brian Eno were unveiling the memorial. Pavarotti covered his hands with poster paint, followed by Bono and the others. Luckily no one’s clothes were splashed.
We had to get Pavarotti upstairs, through the crowd, for the press conference. I pushed my way through them to arrange for the lift to take him up. It was full. Its occupants included the Swiss Ambassador and a German army general. Unceremoniously, I ordered them out to let the Maestro enter.
Before the conference I'd made sure that there were spaces on the dais reserved for Pavarotti, Bono and a child. As I entered the hall, I saw there were not enough chairs. Tom Stoppard saw my face and vacated his and Bono picked up the child and sat him on his knee. I was now being told that the party had to leave for the Chinooks in five minutes. There was only time for Pavarotti to say, “My message is peace. You saw the horror of war—you see today the peace. The future now is in the hands of the children who will soon be grown up. Try to live in peace. That is the reason why we are here today.”
It was then a dash back to the lift, with just enough time to give Pavarotti and Bono a quick visit to the studio in the basement. ‘Ciao,’ Luciano called out as he was pushed into the street by an increasingly nervous military escort. He was gone.
Some months later, I asked Pavarotti if he would submit his memories of the day to us and he wrote this:

“It is no exaggeration to say that visiting Mostar that day was truly one of the most beautiful moments of my life. For two years, we had been raising funds through concerts and albums to build the Music Centre and, to eventually see its completion and to witness some of the beautiful and talented children of Mostar performing for us was simply a joy. The children that day were so very patient. We were delayed on our journey by something beyond our control, the weather! Those children are an example to us all and a tribute to Mostar. If music is central to a person’s life, it can be something very special and life-affirming. The Music Centre was built for the children - I can only hope that making music helps in the healing process and that it will bring joy to the children of Mostar for many, many years to come."

You can view a video of Pavarotti's arrival at the centre here: