Half the world is missing 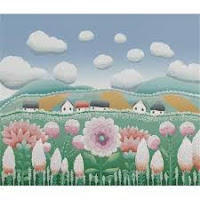 'Left Field' is a memoir with many meadows, one of them containing the flowers and fields of the Croatian naïve painter Ivan Rabuzin. Some years ago as his London agent, I produced a BBC Arena film made during the wars in the former Yugoslavia. With Rabuzin's paintings came a homespun philosophy: ‘When a man looks at something, he just sees half of it. At every moment, half the world is missing to us so we must turn in order to see the second half. Everything depends on what we see and how long we see it. That’s how long we live. Unfortunately, for most of us, even when we are alive, we live only half a life.’ Despite selling truckloads of his silk-screen prints in Japan and with buyers like Woody Allen, it proved impossible to popularise his work in the UK. Croatia: The Artists' War was panned by the critics here. Giles Smith in The Independent said, ‘Most of his paintings look like the kind of Get Well card you might buy for someone you didn’t know that closely.’ Check Rabuzin's art out for yourself here. He liked to play Chopin when he worked though this video is set to Handel.

Posted by David Wilson at 03:52 No comments:

The Guardian (21 Sep 2015) says that there are moves to bring to a halt police investigations into child sex abuse amongst Establishment figures. The role of Exaro - the news organisation whose work played a major part in bringing about the police inquiries - is being brought into doubt. The Guardian says "One complaint came last November over the presence of its journalist, David Hencke, a former Guardian reporter, at a private meeting for survivors and their representatives. A second complaint was made to another senior inquiry official three months later, alleging that the role Exaro was playing – 'seemingly with the assistance of panel members' –was 'causing havoc' among some survivors." If you check out the Exaro website you will see that they work meticulously in their exposure of corruption and bad practice at the highest level. What's more they conduct their work more honestly and rigorously than the corporate media. I have known David Hencke since he was a Guardian journalist and led the investigation into my allegations involving War Child. He was incredibly thorough and would not commit anything to public notice until he was sure he had a watertight story. He even investigated me and was right to do so. This is what Exaro itself says about David: "David Hencke led our exposure of senior civil servants who were able to avoid tax by working off payroll. The story won David the title of political journalist of the year. David was at the forefront of Exaro's exposure of secret recordings of a meeting where Rupert Murdoch made clear that he was aware that some of his newspaper journalists had paid bribes." Check out Exaro's work for yourself.
Posted by David Wilson at 00:41 No comments:

Jon Snow has today pledged for his copy of 'Left Field'. If you don't have your copy on order yet check out the Brian Eno interview and then order here
Posted by David Wilson at 14:53 No comments:

God save the hypocrites

My dad died two years ago aged 101. On his 100th birthday he received a card from the Queen. Hardly able to move he kicked it off his bed. He was one of the first Allied doctors to enter Bergen-Belsen concentration camp. Would the Daily Mail care to denounce him as 'disrespectful' of his country?
Read more about my father here:

Posted by David Wilson at 01:19 No comments:

“The Labour Party is now a threat to our national security, our economic security and your family's security.” David Cameron. These words could have been said by General Franco – just replace 'Republicans' or 'Reds for The Labour Party. Even some Tories understand this – David Davis has attacked the trade union bill as being 'Franco-style'. Last night at the Jeremy Corbyn celebration at London's Forum Mark Steel said,  "What has happened is exciting. It's marvellous but it is also daunting because all of us have to do what we can do to protect Jeremy - not just Jeremy, but the ideas that he stands for ... there's been a movement building and it's been looking for someone, some thing, somewhere to attach it to. They found it a bit in Scotland and with Caroline Lucas and people like that - and now very much with Jeremy. It's a fantastic movement which we've got to protect." The last place this movement will affect will be in Parliament – just look at the glum faces and silence on the Labour benches yesterday. Never thought I'd say this, but join Mark Steel and join the Labour Party. Be a part of the Corbyn protection. Be active against the new Francos.

Posted by David Wilson at 01:29 No comments:

“We don't have to be unequal. It does not have to be unfair, poverty isn't inevitable. Things can, and they will change" Jeremy Corbyn, 12 September 2015. A momentous day in this country. Just had time to watch Jeremy elected leader of the Labour Party before joining 100,000 marching through central London in solidarity with refugees. Jeremy is my local MP and I have been helping out with his leadership campaign – archiving media reports. I hope his victory means I can stop this work! I have to get back to my book, 'Left Field' , and rewrite parts of the chapter about my politics. “Towards the end of the Grunwick strike in 1977”, I wrote in 'Ships at Sea' - the chapter on my political life, “I remember a speaker on the picket lines calling for a march on Parliament. This was booed and someone shouted out, ‘Don’t disturb the dead.’ I was not alone in my scorn for the ‘parliamentary road’.” I hope my readers will settle for this as a postscript: "September 2015: Despite not wishing to disturb the dead I supported the Jeremy Corbyn for Labour Party leader campaign. Perhaps this is because he is one of the few MPs who is not dead. One of the few who offer an alternative to austerity and war, an alternative to the estate agents of New Labour. As my constituency MP I have consistently voted for him for these reasons and not because he is Labour."

Posted by David Wilson at 11:25 No comments:

In contempt and despair I hardly need change a word of Shelley's 'Mask of Anarchy'
As I lay asleep in Italy
There came a voice from out of the Sea,
And with great power it forth led me
To walk in visions of a cemetery.
I met Murder carrying bombs--
He had a mask like Cameron--
Very smooth he looked, yet grim;
Seven blood-hounds followed him:
All were fat; and well they might
Be in admirable plight,
For one by one, and two by two,
He tossed them human hearts to chew
Which from his wide cloak he drew.
Next came Fraud, and he had on,
Like Lansley, an ermined gown;
His big tears, for he wept well,
Turned to mill-stones as they fell.
And the little children, who
on the beach played to and fro,
Thinking every tear a gem,
Had their brains knocked out by them.
Clothed with Mail and Sun, as with light,
And the shadows of the night,
Like Duncan-Smith, next, Hypocrisy
On a crocodile rode by.
And many more Destructions played
In this ghastly masquerade,
All disguised, even to the eyes,
Like MPs, lawyers, media liars.
Last came Anarchy: he rode
On a white horse, splashed with blood;
He was pale even to the lips,
Like Death in the Apocalypse.
And he wore a kingly crown;
In his grasp a sceptre shone;
and on his brow was worn--
'I WILL STAND AND FIGHT THIS SWARM!'
With a pace stately and fast,
Over the Middle East he passed,
Trampling to a mire of blood
The suffering multitude.
And a mighty troop around,
With their trampling shook the ground,
Waving each a bloody sword,
For the service of their Lord.
And with glorious triumph, they
droned through whole countries proud and grey,
Drunk as with intoxication
Of the wine of desolation.
O'er fields and towns, from sea to sea,
Fled the People hand in hand,
Tears at front, a corpse behind;
Till they came to Calais town.
And each person, panic-stricken,
Felt his heart with terror sicken
Hearing the tempestuous cry
Of the triumph of Anarchy.
For with pomp to meet them came,
Clothed in arms like blood and flame,
The hired guards, with Hammond's bid
`Fight marauders and their kids'.
Posted by David Wilson at 21:13 No comments:

Cameron has not read Article 14

This is an account of a visit to the Calais refugee camps from my friend Irial Eno. It deserves the widest readership ...


The pressing issue right now is one of human rights. Article 25 of the UN Declaration of Human Rights states that every human being “has the right to a standard of living adequate for health and wellbeing… including food, clothing, housing, medical care”. Whatever your views on the migrant situation, these people are human beings, not animals, and they deserve their basic human rights.
Posted by David Wilson at 23:05 No comments: