review of 'Left Field' has been featured in Kirkus Reviews 12/15 issue. Less than 10% of their reviews are chosen, so am well pleased. "His shared heart wrenching observations are clearly a highlight of this richly textured, moving work … Raw and compelling; a story well told of a vital and varied life in a war-torn region."(Kirkus Reviews).
* Only one month to go to release of audio version of the book 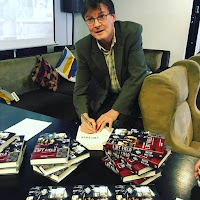 Signed copies of 'Left Field' are available from Public Reading Rooms for £13 to include postage.
Posted by David Wilson at 00:27 No comments:

ITV's 'On Assignment' in Mostar

Julie Etchingham has confirmed that she will be coming to Mostar in September to make a short film for ITV's 'On Assignment' – about the Pavarotti Music Centre 20 years after its founding. Julie was in Mostar for BBC Newsround when Pavarotti came to open the centre. Here is a film of the opening.

She will meet some of the children, now adults, who attended the Centre twenty years ago and find out what has happened to them in the intervening years and how the PMC affected their lives. People like Adin Omerovic, aged nine at the time, who remembers this:

‘I, together with my classmates, practised a song to perform for the opening of the Pavarotti Music Centre. I had heard of plans for the Centre, but I could not dream that I would be there or near to Pavarotti. At the end of the song, “Big Bam Boo”, I gave Luciano Pavarotti a flower. I still remember that day when we waited for him so long and I cannot forget how strong my heart was beating after his speech. He said, ‘Grazie, grazie,’ I still remember that. I got a toy from him which I still have. I would like to have more memories like this one. Thank you very much, Pavarotti.’

Left Field is available at Waterstones and on Amazon

Jeremy Corbyn has excited the fury of the media with his proposal for wage caps. The Daily Mail denounced his 'sub-Marxist drivel' while The Daily Telegraph fumed at his 'staggering assault on individual ambition and market forces.'
In fact he probably took the idea, not from Das Kapital but from (Lord) Richard Rogers, who long ago applied a ratio earnings cap in his architectural practice.
With lurid accounts of how planes out of the UK would be full of investment bankers and football players I wonder how many charity bosses would be on board.
As the co-founder of the charity War Child * I am shocked at the salary level of charity bosses. We have all heard of the £234,000 salary at Save the Children. In fact executives working for the UK’s top 100 charities have an average remuneration package of just over £167,000.
I suppose that the wage of the present War Child CEO, a mere £95,000, is modest by comparison.
The justification is always that the voluntary sector has to compete with the corporate world and attract appropriate 'talent”.
Reprieve founder, Clive Stafford Clark, would disagree. Supporting the rights of prisoners worldwide, the charity employs numerous lawyers who would be paid much more in corporatopia. In a recent Guardian article, Clark wrote that the highest paid cannot be paid more than one-third more than the lowest paid... 'one should want to do good rather than do well. That said, we pay a very reasonable salary, and we attract brilliant people from all walks of life – we just don’t pay them (or me) excessively, and we do it with a degree of equality. … fairness is much more likely to foster happiness than the brutal competition over money advocated by some.'
Here here to that and I would recommend that the charity I founded follow the Reprieve example.
If wage cap principles cannot be applied in the voluntary sector we will have increased cynicism towards their motives on the part of the public and a diminishment of their potential to bring about change for the better in this 1% world.
As Dhananjayan Sriskandarajah, the secretary-general of Civicus has said: ‘We have become a part of the problem rather than the solution. Our corporatization has steered us towards activism-lite, a version of our work rendered palatable to big business and capitalist states. Not only does this approach threaten no one in power, but it stifles grassroots activism.'

*I have been asked to state that my views concerning War Child are my own, otherwise “there is a risk that I will be seen to be passing myself off as a current War Child representative.”
You can read about my work as former director at War Child and how it ended in Left Field
Posted by David Wilson at 07:48 No comments:

The Sunny Side of the Street 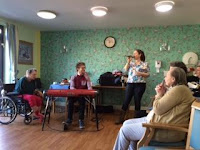 Recently I went to Bridgeside Lodge Care Home in Islington to see for myself the work carried out by the Spitz Charitable Trust. It was set up by my old friend Jane Glitre to 'relieve social isolation in local communities through the power of live music.' Bringing professional musicians to perform alongside the residents of places such as Bridgeside, at this gig vocalist Emine Pirhasan was accompanied by Arthur Lea on keyboards performing songs by Aretha Franklin, Bill Withers, Ben E King, Jonny Nash, Fats Waller, Louis Armstrong and Jimmy Cliff. Not a white cliff of Dover in sight, which tells us all we need to know about the speed of time! The home overlooks the Regent Canal and when I looked across the water at the Hanover Primary School I could see kids in the gym skimming about the floor to music. There was no skimming here at Bridgeside, but there was movement of mind and body which was at least as impressive. John had been wheeled into the room slumped to one side and apparently asleep. But as 'Stand By Me' opened he started tapping his feet and mouthing the words. In another wheelchair Julia's initial contribution of loud vocal exclamations gave way to hand and arm dancing in perfect rhythm with the musicians. Song sheets were handed out and most joined in with their favourites. One woman who didn't seem to be aware of her surroundings grabbed a rattle and with determination moved it and herself into the rhythm. A lot of the songs referred to sunshine. 'On the sunny side of the street', 'You are the sunshine of my life', 'Sunlight hurts my Eyes' and my favourite for this bright sunny winter morning, Jonny Nash's, 'Gone are the dark clouds that had me blind, It's gonna be a bright (bright), bright (bright)
Sun-Shiny day.'
Posted by David Wilson at 05:01 No comments: