Jeremy Corbyn is “an anti-Semite who has “given support to racists, terrorists and dealers of hate”, the former chief rabbi Jonathan Sacks has said. In an interview with the New Statesman, he described Corbyn’s remarks on “Zionists” as, “the most offensive statement made by a senior British politician since Enoch Powell’s 1968 ‘Rivers of Blood’ speech”.
What? And in the New Statesman? Stay with me. He goes on
“Now, within living memory of the Holocaust, and while Jews are being murdered elsewhere in Europe for being Jews, we have an anti-Semite as the leader of the Labour Party and her majesty’s opposition.”
One of those countries where anti-semitism is now rampant is Victor Orban's Hungary. Wait a minute. Orban was recently an honoured guest of the Netanyahu government.
In our own country The Middle East Forum, a hardline, pro-Israel conservative think tank were funding Nazi Tommy Robinson when he was in prison.
In the words of their Director, Gregg Roman, who has worked in Israel's Defence and Foreign Ministries. “we are helping Robinson in his moment of danger in three main ways .. to fund his legal defence … bringing foreign pressure on the UK government to ensure Mr. Robinson’s safety and eventual release ...”
MEF previously funded far-right Dutch politician Geert Wilders’ legal defence, “against Dutch charges of inciting racial hatred”.
It has now reached the level of absurdity when, before criticising Israel, we must prove that we are not anti-semitic. Let’s do it.
My father was one of the first Allied doctors to enter Bergen-Belsen concentration camp. The photos he made there, and later showed me of the skeletal prisoners, scarred my young mind. It was those haunting pictures that led me to a lifetime of anti-fascism. I took part in street fights with the British Movement, forerunners of the British National Party, the National Front and today's Israeli-backed Nazi, Tommy Robinson.
But my opposition to Zionism now makes me 'anti-semitic.” Well I join a good crew. Albert Einstein said, “The (Israeli) state idea is not according to my heart. I cannot understand why it is needed … I believe it is bad.”
Primo Levi, a survivor of Auschwitz, said, “Everyone has their Jews and for the Israelis they are the Palestinians”.
Then there is Marek Edelman, one of the leaders of the1943 Warsaw uprising. In a letter in support of the Palestine resistance, he compared them to ZOB, the Jewish fighters in Warsaw and greeted them thus, “Commanders of the Palestine military, paramilitary and partisan operations.” organisations.”
All of them now stand accused of anti-semitism. In the memory of those Jews I spit on these accusations and lies.
So who are the Zionists? Founder of Zionism at the end of the 19th century and a proponent of a Jewish homeland was Theodor Herzl. He was an admirer of the British Empire and wrote to Cecil Rhodes, he of the white settler colony named after him, Rhodesia, “You are being invited to help make history … it does not involve Africa but a piece of Asia Minor, not Englishmen but Jews … I turn to you … because it is something colonial ..”
Chaim Weizmann, who suceeded Herzl, wrote to the Manchester Guardian: “Should Palestine fall within the British sphere of influence and should they encourage Jewish settlement … we could develop the country, bring back civilisation and form a very effective guard for the Suez Canal.”
Of the contemporary Zionists we should not forget the Evanglical Christian Right. Prayers at the US Embassy, on the day Trump moved it to Jerusalem, were delivered by Robert Jeffries, a Dallas megachurch pastor who said Hitler was sent by God to drive the Jews to their ancestral land.
Amongst the first Jews who opposed Zionism were those who set up the Jewish Bund in Poland and Russia. They stressed the four principles of socialism, secularism, Yiddish and doyikayt or “localness.” Doyikayt was encapsulated in the Bund slogan: “There, where we live, that is our country.”
“We Bundists”, wrote one of their early leaders, Viktor Alter, “wish to shatter the existing economic frameworks and show the Jewish masses how a new society can be built not by escape, but by struggle. We link the essence of the Jewish masses’ life to that of humankind.”
Their contemporaries in this country can be found in Jews for Justice for Palestinans, Jewish Voice for Peace and many others.
If opposition to Israel is a definition of anti-semitism then add me to the list along with Corbyn’s mum and my dad. She was blocking Mosley’s fascists at Cable Street in the 1930s, while the Daily Mail, who are today leading the demands for Corbyn to resign as Labour leader, was lauding Mussolini and Hitler.

Last word to Rabbi Sacks and a question for the New Statesman. Recently he led a march through Palestinian east Jerusalem which Haaretz described as “a gender-segregated, extreme-right, pro-occupation religious carnival of hatred” in which participants chanted “Death to the Arabs” and “Al Aqsa will be burned down.” You can find more info at Haaretz here
To the New Statesman a question. If you have any remaining respect for the tradition and history of your magazine you should distance yourself from your interview with Sacks and do it now! Oh and apologise to your readers.

It's long past time to call out these people for who they are. No pasarán! 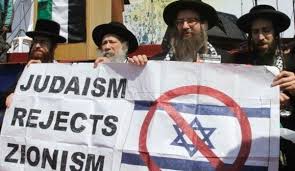 Posted by David Wilson at 12:29 No comments: 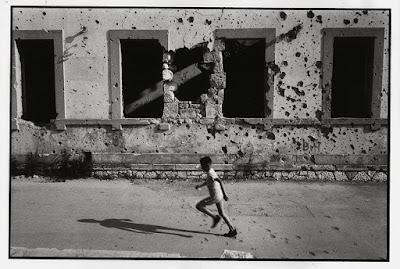 Left Field is now on sale from Public Reading Rooms for £5
(hardback including delivery). These are the last of the special edition, hardback, with embossed cover and illustrated frontispiece by acclaimed Dutch photographer,Thom Hoffman.

'David is an adventurer and a freethinker, who did something truly useful with his life.' - Brian Eno. (watch interview)  'David Wilson has lived a life and a half.The broken world needed people like David; it still does.' - Sir Tom Stoppard.    'Fantastic and salutary … a born raconteur's account of a remarkable life.' - Michael Walling, Artistic Director, Border Crossings.    'This memoir of a very colourful life is both entertaining and illuminating.' - Amir Amirani, Director “We are Many”.    'What a life this man has led.' - Dorothy Byrne, Head of Channel 4 Documentaries.   'David's entire life has been dedicated to trying to make the world a better place.' - Craig Murray, ex-UK Ambassador.    'Sometimes funny, often moving and occasionally tragic ... one of my top recent reads.' - Morning Star.  'David Wilson shows us how political activism on the Left should be: engaged, informed and passionate. With more people like him, the world would be safer and happier. - Ken Livingstone
Posted by David Wilson at 10:13 7 comments: 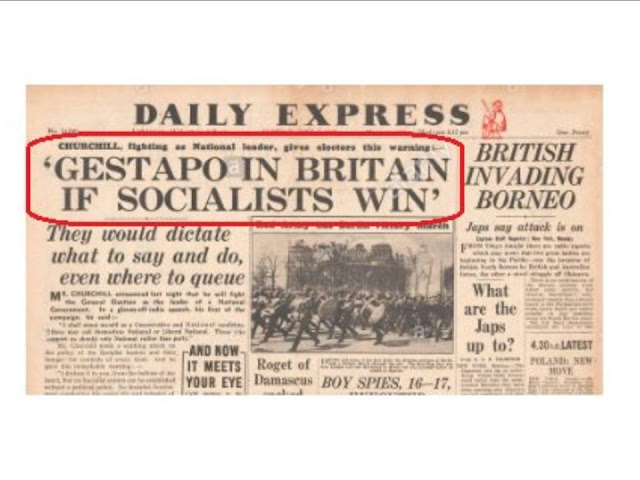 Nothing changes: This is the Daily Express headline just before the 1945 general election Labour Party victory. The new government quickly introduced the National Health Service among other reforms.
Posted by David Wilson at 02:14 1 comment: