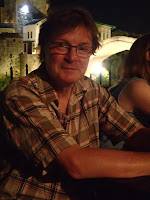 Brian Eno: This is an excellent and inspiring book. David is an adventurer and a freethinker, who, despite the best efforts of an education designed to equip him for obedient anonymity, somehow did something truly useful with his life. His stubborn and yet self-effacing commitment to his ideals carried him through many daunting situations, and his sense of humour kept him able to see the funny side.

Haifa Zangana: a memoir where the personal is entwined with activism and woven into a poetic multi-coloured tapestry.

" Left Field is a thoughtful and gentle memoir. David’s obvious good nature and ability to connect with people is demonstrated over and over, from the influential individuals whose support he enlisted in the early days of War Child to the character sketches that he draws regularly throughout the book… I enjoyed his relaxed writing style and the chapters that veered from the chronology to reflect or add narrative detail... His is an enjoyable memoir, reflecting on a compassionate and varied life, and an important reminder of how destructive war is both on individuals and communities, and the important role we can all play in fighting for a better world. Socialist Review (July/August 2016)

Perhaps not surprising that it is the Left who have reviewed 'Left Field'. Here is earlier one from Socialist Review

The puncstorta jelly roll was frosty

This weekend marks the 60th anniversary of the Hungarian Revolution, a working class revolt against a 'communist' state. Workers and students declared a general strike and workers' councils sprung up across the country. In cities they armed themselves and fraternised with the troops, but were eventually crushed by Soviet tanks. Hungary '56 was an example, last seen 20 years before at the time of the Spanish Civil War, of the working class reaching for power, and taking place in one of the 'workers' states'. It showed an alternative to capitalism and Soviet communism and galvanised many, including myself, towards revolutionary politics. Here is my account of that year from 'Left Field'.

“In October 1956 demonstrations broke out across Hungary, demanding the withdrawal of Soviet troops. The government fell and Imre Nagy became Prime Minister in the middle of a revolution. Workers and students set up militias; troops tore off their insignia and joined them on the barricades. Police were killed at street corners, as well as some Russian soldiers. It seemed that the few remaining Soviet troops would withdraw. But on 4th November they returned in large numbers. The workers and students only had small arms and Molotov cocktails. Thousands were slaughtered. Lucky ones fled. My father and mother found homes for two of them, a young couple, Lorencz and Ester. They arrived just before Christmas. Lorencz stayed with us and Ester went to the Schields’s, my parents’ bridge partners. My father told Mr Schield that, as refugees from Hitler, they had a duty to return the favour. I was fascinated by Lorencz’s stories of how he and his fellow fighters had climbed onto the Soviet T-34 tanks and hurled petrol bombs inside. How they had lost many comrades and how grateful they were to have a new home, thanks to my parents. When Ester came to visit her boyfriend, they would cook goulash, which made a change from my mother’s steak and kidney pie. They were always cheerful, but it was only a front. I remember waking at night to hear Lorencz sobbing in his room. After leaving us, they went on to qualify as dentists, marry and settle down in Kent. Every Christmas they would send us a card. Ten years after they’d arrived in this country, they rang my parents and said they wanted to visit. They turned up in a Rolls- Royce. My father watched as they turned in to our drive. ‘Betty, you answer the door.’ He pointed at the car. ‘Look at that.’ ‘It’s a Rolls-Royce, Ian,’ my mother said. ‘They have done well.’ He slammed his study door shut. My mother welcomed them. ‘Ian’s been very busy this week. He’ll join us soon.’ She left Ester and Lorencz with my sisters and me. I could hear her whispering loudly outside his door, ‘Ian, come out now. We have guests. Ian, do you hear me?’ While I gobbled up the delicious puncstorta jelly roll they’d brought, the conversation was as frosty as the cake’s pink icing. My father was disappointed at their success. I suppose he expected them to be revolutionary dentists in Sevenoaks.”

Posted by David Wilson at 00:41 No comments:

Thank you Melanie Friesen for this detailed analysis and appreciation of 'Left Field'
Melanie Friesen has worked as a literary agent for filmmakers in the UK, as Creative Director in the UK for MGM/UA, the same position at Cineplex Odeon in Los Angeles and as VP for Martin Scorsese’s company in New York.

I enjoyed the read and suffered the total despair of your myriad attempts to get the show on the road with War Child in spite of so many battles, including egos. What a triumph all the same.
The childhood in an autobiography/biography interests me the most because it’s watching how the seedling grew and seeing what might have influenced it. I also like to connect to childhood events that the writer mentions, as it brings me closer to the book.
Also how many books have notes at the back that are just as interesting as the text?
Some examples with your book:
Your description and recipe of your mom’s roast potatoes: My mom wasn’t interested in cooking, nor in any household activity, so she got several jobs which interested her very much in order to pay for a housekeeper. I adore food and the description of these potatoes had me gnawing on the spine of the book. Luckily I was on the Air Canada flight back to Vancouver while reading it and the meal on board was so disgusting that no one found it unusual that I was trying to eat my reading material (JUST KIDDING!)
The horror and fascination of you staring at your dad’s concentration camp photos: Cripes I remember that so well. I think I mentioned that mom’s whole family except her parents and brother – i.e., her grandparents, cousins, uncles and aunts – were all gassed at Auschwitz and Theresienstadt. Just the words ARBEIT MACHT FREI give me the worst chills. So I was with you on that page.
Thomas Dormandy: My mom was born in Slovakia of Hungarian parents and immigrated to Chile in 1939. Her mother tongue was Hungarian. In 1956, she worked in Vancouver at the docks and the airports translating for Hungarian immigrants and got many of them homes and jobs. As a result, I love Thomas as much as your dad did.
“I also got a good grade in history. I couldn’t stand the present so I concentrated on the past.” Utterly, David, utterly, hence me enlisting in Whitechapel guided tours at night about Jack the Ripper. Fuck the shard, bring on St. Paul’s through the mist.
Your Argentinean experiences are exactly that, but I found many of them very Chilean, since I have been there to see family 4 or 5 times. Love that you arrived in Rosario where Che was born. Ever since my Nov. 2015 trip to Cuba, I hold him in even higher esteem than ever.
Re: Yoruba having the highest rate of twin in the world – Wilmette, Illinois has the highest rate of multiple births in the US – that's where my identical twin nephews were born. Love it – Yoruba and Wilmette.
The Museum of Broken Relationships in Zagreb – Never having heard of it, but thinking it a great idea, I read about it on the internet. I think it must be very comforting for those who are sad about a break-up to go there and be comforted by many others who have done same.
Best line in the book (re: Ivo): “When he played his accordion, he looked as though he was telling himself a joke.”
You mention Bob Hoskins – I was an extra in PENNIES FROM HEAVEN since I knew the producer, Ken Trodd, and I was broke at the time.
You mention Rebecca West: In 1976 I did some secretarial work for her in her Kensington flat. She showed me a tea set that Queen Mary had admired and said, “When royalty said they liked something, one was supposed to gift them with it. But I didn’t.” She left me my pay on the mantelpiece but I didn’t take it because I felt sorry for her, thinking she was old and lonely. What a drip I was, I’m sure she could afford to pay me and I was so broke.
I love the quotations that open some of the chapters, my favourite being the one by Milan Kundera: “… for there is nothing heavier than compassion. Not even one’s own pain weighs as heavy as the pain one feels with someone, for someone, a pain intensified by the imagination and prolonged by a hundred echoes.” The quotation from ALL QUIET ON THE WESTERN FRONT is also as powerful as it gets. That was the book/film that turned my mom into a pacifist.
“Enid was a wrestling fan and had a friend with whom she went to matches at Wembley …”: It’s quite a leap and not at all relevant to your book, but when I worked for Scorsese, he was going to produce a film directed by Dennis Hopper and starring Sean Penn based on the book by Joyce Carol Oates called YOU MUST REMEMBER THIS. It’s about a girl, Enid, who falls into immature love with her Uncle Felix, a boxer:
To see you refer to an Enid and wrestling brought the book straight to my mind and the meeting I had with the 3 men mentioned above. The film never happened, too bad – it was the right team for the story.
Very small points – if, by chance, the book is reprinted, there are some spelling mistakes with a few foreign words: The Donna Reid show is spelled Donna Reed. À tout a l’heure also has an accent on the second “a” as well - À tout à l'heure. Schatzi is spelled Schatzie
Well, the next Margarita is on me, thank you so very much for giving me your book.

'Left Field' is on sale at Watersones, on Amazon and for US and non-UK readers at Book Depository
Posted by David Wilson at 02:51 No comments:

I was at Sussex University today (15 October 2016 ) at the Migration Awareness Day and about to talk about NGO's and refugees, about my experiences at War Child and about my book, 'Left Field', which deals with these issues. The phone rang. It was LBC asking me if I was prepared to be interviewed by Maajid Nawaz. I told them that I was co-founder of War Child, author of 'Left Field' and guest at this conference and could speak in those capacities. They asked me it was it true that I had been Press Officer at STW and I said I had not worked for Stop the War for years. I asked them to call back at 2.30 after my talk and assumed that the call was a result of the conference taking place at that moment. As you can tell from this excerpt the invitation had nothing to do with the migration awareness day and all to do with ensnaring me in Maajid's venomous trap. Pity they stopped this recording just before I screamed my anger at him and shut him down. For those interested in uncanny happenings. I think I have been called twice in the years since I left STW. And this call, five minutes before my talk, seemed to me obviously connected to my talk. Obviously not. Watch the interview here.

Posted by David Wilson at 11:27 No comments: