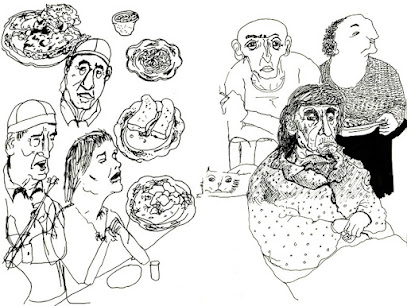 Riversmeet will be publishing my new book, My World Café. Here is

their first blog about it.

It is a stew of food stories, memories and recipes from around the world, ranging from popcorn to borscht, apple strudel to burritos, baklava to teriyaki. Each chapter includes a brief history of the food, a personal memory and a recipe. Laura Davis will be illustrating the book.

Here is an excerpt from the chapter on “Strozzapretti”:

Originating in Perugia, strozzapreti is hand-rolled pasta which roughly translates as ‘priest-strangler’. One explanation is that gluttonous priests so loved the pasta that they ate it too quickly and choked themselves. Another explanation is that women offered the pasta to churchmen as payment for land rents. Their husbands were so angered by venal priests eating their wives’ food that they wished the priests would choke on it. The most likely reason to me is that it was common practice for priests to visit parishioners’ homes after Sunday Mass and when the hosts tired of his visit, they would serve this ‘rough’ pasta to let him know that he had overstayed his welcome.

My World Café is my second book. Left Field: The Memoir of a Lifelong Activist was published by Unbound in 2016. “David has lived a life and a half. The broken world needed people like David; it still does.” —Sir Tom Stoppard  “This is an excellent and inspiring book. David is an adventurer and a freethinker, who did something truly useful with his life.” —Brian Eno

"Riversmeet focuses on high quality writing, performance and teaching which engages with contemporary issues by linking the past to the present." 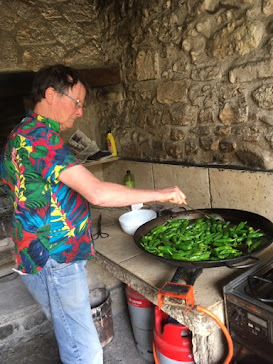 www.davidwilson.org.uk
Posted by David Wilson at 10:30

Disruptive nanotechnology - at least the name and intent is honest

The Guardian reports that "Two entrepreneurs with no apparent background in healthcare have made £20m – and could make tens of millions more – after landing roles as middlemen between the UK government and a US firm that won £3.7bn of contracts to supply lateral flow tests. Charles Palmer, whose background is in property, and Kim Thonger, a former shoe retailer, are the co-owners of Disruptive Nanotechnology, a business that had just £85 in the bank and debts of £3,592 at the end of 2019."

Meanwhile Boris Johnson says some hospitals feel "at least temporarily overwhelmed” and heart attack patients calling 999 in parts of northern England are being asked to get a lift instead of waiting for an ambulance.

My question is: what has happened to the £37 billion which was available to the NHS for the Covid crisis. A rhetorical question because we know it went into the pockets of Disruptive and other Tory crony companies.

It’s only because an ambulance came for me within minutes of being called that I am here today. And the NHS has saved my life on three occasions. I would call down nine of the biblical plagues, water turning to blood, frogs, lice, flies, livestock pestilence, boils, hail, locusts and darkness, on this evilly corrupt government, but then they would need the NHS to save their lives.