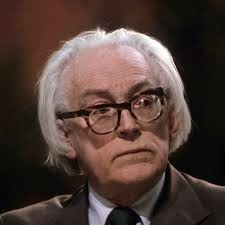 Here is another excerpt from my forthcoming book, Left Field
- Michael Foot's visit to Mostar.

In the months leading up to the opening of the Pavarotti Music Centre in December 1997, we had numerous visits from local, and not so local, politicians. I remember stumbling across ex-Tory minister, Michael - Something of the Night - Howard in the reception area. He was being shown the nearly-completed building by an official from the EU Administration offices. I asked him what he was doing in Bosnia Hercegovina. ‘I’m on a fact-finding mission,’ he said. ‘Who are you meeting to do that? I asked. ‘Politicians,’ he said. I answered, ‘Mr Howard, you should know better than anyone. You don’t go to them for facts.’ He did laugh.

In July I had watched Steve Biko’s ex-driver, the percussionist, Eugene Skeef, run workshops in the town. He had been invited to Mostar by Nigel Osborne and had recently worked with Edmund Mhlongo in Kwa Mashu on the Ngoma cultural education project. Remembering Mandela’s words to me that our music centre was a project needed in Africa, I realised that Eugene was a key to internationalising the PMC. I had also heard about the success of his djembe classes with children in the UK.

His first workshops were so successful I offered him the job of director of music development at the centre. He agreed to start work when the building opened. A few days before Eugene returned to London, we went to Dubrovnik. There we met two German doctors and they were interested to hear about our work in Mostar. Eugene had their eyes popping with his words about the importance of music and rhythm in our lives. One of the doctors said he spoke like a poet. He laughed and rewarded them with, “listen for the cadence of the sun in its journey that never ends. When night falls and the song fades, follow the rhythm of the moon when your voice disappears like a bird.” Those words got us a bed for the night. When we told them we were going to spend the night sleeping on the beach, they invited us to stay at their hotel, Villa Dubrovnik. Much to our surprise, there, at the bar was a politician I was delighted to meet; Michael Foot and his wife, Jill Craigie. They told us they stayed there every summer.

Sitting on the hotel balcony overlooking the old city walls, we discussed the war and the film he and Jill had made about it, Two Hours From London. I told them what a good documentary it was, but that it was a bit light on the Bosnian-Croatian war and that they should visit Mostar. Michael agreed to come with us the next day. Jill opted out because she didn’t like travelling along the serpentine roads.

Eugene and I showed Michael round Mostar’s old town. He was already eighty four and walked very slowly. It was impossible to use a car in Mostar’s narrow streets, but he was determined to see as much as he could. We ended our walk at the Centre where he sat down at last in the uncompleted courtyard. 'This is very impressive, David. I am sure you will be doing wonderful work in this building.'

That afternoon I drove him back to Dubrovnik and we spent the three hour drive discussing politics and poetry. I told him I’d enjoyed Paul Foot's Red Shelley, his nephew's book about the poet. Michael laughed and broke into, 'Rise like lions after slumber, In unvanquishable number, Shake your chains to earth like dew, That in sleep have fallen on you, Ye are many, they are few.'
After a pause he added, ‘But you know, Paul is wrong. Byron was the greater poet and greater revolutionary. Have you read "Darkness"?’
‘No, I haven’t.’
‘Stuck on Shelley, are you?' Another pause and then he recited, 'They slept on the abyss without a surge-- The waves were dead; the tides were in their grave, The moon their mistress had expir'd before; The winds were withered in the stagnant air, And the clouds perish'd; Darkness had no need, Of aid from them--She was the Universe.' Michael smiled at me. ‘Byron goes further than Shelley. You must read him.’

When I got back to Mostar, Eugene and I went to a cafe close to the suspension bridge which had replaced the destroyed stone bridge. We watched in horror as a young man climbed over the rope hand-rail and hurled himself the twenty metres backwards into the Neretva. We rushed down to the river and Eugene and I managed to grab hold of his arms. We thought he should go to hospital, but he said he was okay and got up to walk away. I persuaded him to come to my flat which was close to the bridge.

He was soaking wet and Eugene gave him one of his T-shirts and a pair of his trousers. Over coffee he told us he'd come from Kiseljak in central Bosnia. He had never recovered from the loss of his mother, father and two sisters in the war. He had an aunt who had been living in Mostar and had come to look for her. She, too, had been killed. In despair, he had spent the last of his money on drink and then had decided to end his life. He had been disappointed to find the suspension bridge was four metres lower than the old bridge which had been twenty-four metres high at its apex. But he still thought he would die if he fell backwards into the water. While he was talking Eugene played soothing rhythms on his djembe. When he left us we felt guilty we hadn’t been more persistent in insisting he go to the hospital.

Two months later a package arrived at my London address. It was a collection of Byron’s poems with a dedication on the inside cover, “Byronic greetings from Michael Foot, with many thanks for a most instructive visit to Mostar, Sept 1997. Read especially Don Juan, right through non-stop, as I did again. See also Darkness. It has reflections of Mostar.”

I don’t remember giving him my address so I assume he must have contacted the War Child office. All these years later Michael’s ‘Byron’ is on my shelf  and I dip into it a lot. I always start by reading the dedication. I don’t know what happened to the man who fell from the bridge and what he did with his darkness.