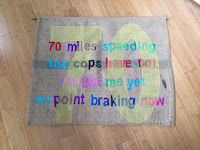 La Torre de Dalt is a large 'Mas' (a Catalan traditional farmhouse) in the hills above Girona. It's the place where, for the last five years, Anne has run her annual writing retreats. When her course ended this June, I hired it for a second week and invited friends and relatives to join me. I told them this was a celebration for my 70th year, but it also marked the completion of Left Field - bringing together some of those who have played their part in my life and without whom I would have had no memoir. I had worried how these people from my past and present would mix: a political banner maker, a businessman, a bereavement counsellor, musicians, writers and journalists. I need not have. Widely and in some cases, wildly, disparate people spent the week talking, eating, drinking, walking and partying together. No one there will forget how we all fell in love with Alice Kilroy as she encouraged us all, willingly or not, towards the Revolution. The writers soon became known as the 'murmuration of writers' as they met in corners of the building to create new work or read excerpts from their novels and poems. They seemed to flock and flow through the building like birds. In the evenings, during their 'open mic' nights, they read their work and invited the rest of us to join them. Oha Maslo, who had driven from Bosnia to Spain with Teo Krilic and his family, apologised for turning down their invitation to hear them: “As soon a I see the first comma,” he told me, “I go into a coma.” If I'd told him that one person was writing a novel about setting up a whorehouse in Australia, he might have forgotten his problems with punctuation marks. In any case his apology was adopted by Julian Herbert, one of the poets there, as the opening phrase for his paean to the week: Comma coma? Trace back through castles, Until, until they're in the sky, And we hold hands together, While we fly. Teo played guitar while Oha joined him on the cajon drum. They sang Na Klepeci Nanulama – about a woman hearing the clogs of her dead mother on the stairs. La Torre looks across at the Cap de Creus above Cadaqués where Dali had his summer home. Some guests visited his museum in Figueres, but they didn't need to go there to experience the surreal. The week took on a weirdly wonderful quality when the Balkan rock group, Dubioza Kolektiv, dropped by. They were en route from Barcelona to France, a tour which was to end at the Glastonbury Festival. When someone asked them where they were from, they answered from practically every country of ex-Yugoslavia. “What was that war all about?” said Mario, “Here we are all together again.” With funky haircuts and dressed in black they didn't touch the bottle of whisky they had brought for me, but drank tea and coffee and ate dainty biscuits. The whisky was emptied that evening, but with no help from me. I am no longer allowed to drink much alcohol. Oha and Teo shook their heads in bafflement each time I turned down an offer of another beer or glass of wine. The only advantage of not joining in, apart from staying alive, was that I was able to talk a bit more sense. On the last day, Maureen Larkin read a 'haiku' for me, which pretty well sums up my life in 18 syllables: '70 miles speeding, The cops have not caught me yet, No point braking now'. Check out La Torre: The Film!


(Left Field has reached its target of 100% . If you haven't bought your copy yet it's now 100% certain to be published)

PIC: Alice Kilroy' 'banner inspired by the haiku
Posted by David Wilson at 05:06