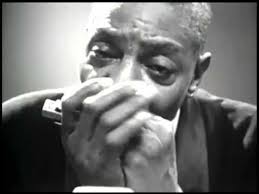 In the 20s and 30s, American black jazz singers, Josephine Baker and Alberta Hunter, found their stardom, not in New York or Chicago, but in Paris and London. ‘The Negro artists,’ said Hunter, ‘went to Europe because we were recognised and given a chance. In Europe they had your name up in lights. People in the United States wouldn’t give us that opportunity.’ In the 50s and 60s this happened again with the great blues singers who played to packed houses at London’s 100 Club and the Marquee. It was Europe and the UK, in particular, that gave them the recognition they deserved. When these musicians arrived in London, their first booking was often at the Bromley Court Hotel, Catford, a short bus ride from my home in south London. Blues greats, Muddy Waters, John Lee Hooker, Howlin’ Wolf and Bo Diddley appeared there with British stars such as John Mayall, Alexis Corner and Spencer Davis. With his pencil moustache, red telecaster, sharp suits and from Rolling Fork, Mississippi - Muddy Waters “Got my Mojo Working”. The Bromley branch of CND used to hold meetings at the Swan and Mitre in the High Street, and I was delighted that being part of Ban the Bomb in South London meant I was among other blues’ fans. I remember one evening we cut the meeting short and decamped to the Court to hear Sonny Boy Williamson, another Delta blues man from Tallahatchie. Here they all are in a collation titled: 'American Folk Blues Festivals,1963 – 1966. The British Tours'. Be sure to check out Mamma Reed and “Baby What you Want Me to Do?” at 33:50  Much more on this in 'Left Field'

NOTE: I am going to see DUBIOZA KOLEKTIV at 100 Club in London on 20 November. I saw this gig in Belgrade in 2014 - my good friend, Oha Maslo is guest singer towards the end. They played Glastonbury this year and this is their 2nd appearance in the UK. Many more to follow I hope.