Haunted by the Ghostly Ghouly 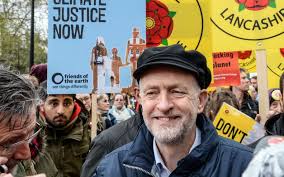 What a day. A blog I wrote at the beginning of yesterday morphed into this one by the end of the day. A bad day and three coffees ended as a good day and three glasses of wine.

I have spent most of my life believing that socialism would never come via a vote in Parliament. I will never forget the start of a march on Westminster against the 1970s anti-union laws and agreeing with the speaker who recommended we don't go there as he didn't believe in disturbing the dead.
And on the Labour Party I took Ralph Milliband's words seriously when he wrote: “Pious references to the Labour Party being a ‘broad church’ which has always incorporated many different strands of thought fail to take account of a crucial fact, namely that the ‘broad church’ of Labour only functioned effectively in the past because one side – the Right and Centre – determined the nature of the services that were to be held, and excluded or threatened with exclusion any clergy too deviant in its dissent.”
But Jeremy Corbyn changed all that for me and I have now joined the Labour Party. I am probably one of the few geriatric members of Momentum. Because of illness, I have been unable to join in party canvassing and have chosen instead to write articles which I hope can serve as ammunition in the struggle. And I have Jeremy to thank for now believing that perhaps radical change can come about with a Left social democratic party.
That process started when Jeremy won the leadership, but it is a struggle in every sense of the word.
On the morning of 4 May I woke and turned on the radio to hear the Right wing MPs, Jess Phillips and Chuka Umanna, demanding an enquiry because the Labour Part had done so badly. I am not supposed to drink coffee, but was now on my third and it was only 8 am.
Why wasn't Jeremy being interviewed or, at least, a shadow minister who would speak truth to this nonsense.
As the day went on it became obvious that Jess of the Ubershrills and Chuka Themoaner were blatantly lying. The BBC's own figures settled on the following.
Labour won 2,323 seats - up 62
Conservatives won 1,330 - down 32
Lib Dems won 536 - up 75
The Greens won 39 - up eight
UKIP won three - down 123
What in heaven's name is their definition of 'badly'.
There is no way the right wing of the Labour Party will tolerate Corbyn and his challenge to the consensual tweedle-dum, tweedle-dee politics of the last decades.
At the heart of this is the neo-liberal agenda of austerity for the many and riches for the few, privatisation and war.
Labour's right wing MPs have and will actively continue to oppose any moves to the Left in their party and seem happy to sabotage a Corbyn leadership which has gathered together ½ million members. As even the 'corporate' media have recognised, any successes from the 3 May local elections have been attributed in no small measure to the dedication of Momentum members.
The ghostly ghouly Blair sits smiling on the shoulders of Tess and Chukaa and the other right wing MPs who are ably backed by their non-recall salaries and their invitations to the front pages of the right-wing media and the comfortable sofas of BBC chat shows.
Elections and their results are important – Jess, Chuka and the BBC understand that well - which is why election results are misinterpreted, but we now need to stress that a socialist Labour Party is not just about elections. We must not return to the days of incumbency in place of insurgency, church politics in place of non-conformist dissent.
The Labour Party needs to return to the mass rallies we saw at the beginning of Corbyn's ascendancy. Be present on picket lines and demonstrations. Stand with and lead popular protests on Grenfell and Windrush. Fight for and with the disabled and the welfare-robbed poor. Defend the NHS from the privateers. Be central to the anti-war movement and alert to those in their own ranks who have taken us to war in the past and likely to do so again - and soon! Support those, often Jewish and Black 'anti-semites' driven out of the Party and shout back at those fabricating 'evidence' against them.
Meanwhile I will keep writing and be on the streets once I have stopped using my stick. Or perhaps I will continue to have it with me just in case!
Posted by David Wilson at 03:24