Fleeing war is not the crime 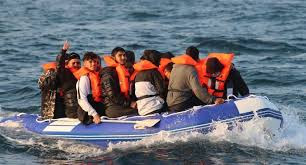 Five years ago I visited the refugees in Calais. First with medics and then with musicians. In the intervening years the refugee situation has only got worse. We used to condemn our politicians for their silence. Now we must condemn them for their words.

Boris Johnson, talking about the fleeing refugees on small dinghies in the Channel, says, “I want to make sure that they understand that this isn’t a good idea, this is a very bad and stupid and dangerous and criminal thing to do ... when people do get here, it is very, very difficult to then send them away again, even though blatantly they’ve come here illegally.”

Lisa Doyle, from the Refugee Council answered him: “It’s incredibly disappointing to hear the prime minister using such inaccurate and inflammatory language to describe men, women and children who are desperate enough to make perilous journeys across the busiest shipping channel in the world ...Seeking asylum is not a crime ... and nstead of scapegoating people in desperate circumstances, the prime minister and his government could address this by ensuring that people do not have to take these risks.”

I wrote up my experiences in Calais for Counterpunch and sadly if I was able to go there again, the only change I’d need to make to these words would be to increase the numbers and extend the references to human suffering.

“In recent years around 60 million people across the globe have fled their homes. Many of them have been running from the abyss of destruction, death and chaos our bombardier politicians have rained down on them. In the last two years more than one million people have reached Europe; the continent’s biggest wave of mass migration since the end of the Second World War. 36% of them are children. Those are the fortunate ones. At least four thousand people have drowned to date in the Mediterranean. An average of two children have drowned every day since September 2015 and 340 children, many of them babies and toddlers, have drowned in the eastern Mediterranean alone ... On shore they have been washed in puddles and wrapped in plastic to keep out the cold. Many have died from hypothermia and, among the living, many are ill … There are at least ninety thousand unaccompanied children among the refugee population ...On both visits we were welcomed with warmth and too many cups of sweet tea. The refugees were eager to talk about their lives and what had brought them so many thousands of miles from their homes … How had they arrived on the channel coast? On EasyJet? Eurostar? Hired coaches? Some of them had walked across Western Europe. When you next fly or train it to southern Europe, look down at the ground. Walked? … Conditions in the Calais camp are diabolical, with cramped makeshift tents plagued by rats, water sources contaminated by faeces and inhabitants suffering from TB, scabies and post-traumatic stress. The homeopaths I went with visited numerous families. Only one didn’t have colds, coughs, sore throats or worse … Many volunteers are working in Calais – doctors, nurses, musicians, and youth workers. At the large and well organised warehouse mostly young people unload foods, clothing, medicines and sleeping equipments … 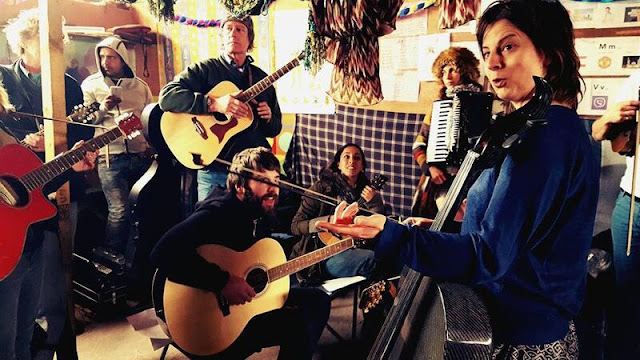 On my second visit with Calais Sessions musicians I spent some of the time ‘teaching’ guitar, but quickly roles were reversed. After 30 minutes of C, G, A and F chords, Assi thanked me, smiled and asked if I’d like to learn Ethiopian Tizita pentatonic scales … Atieyb had brought his guitar on the long journey north. It only had two strings. One young Syrian didn’t want to play guitar, but told me he liked to be close to music. ‘It gives me’, he said, ‘sanity’ … Why did he want to get to the UK. Most of his family had been killed – ‘My sister is in Bristol. I want to go there.’ Can anyone give me one reason why he shouldn’t? 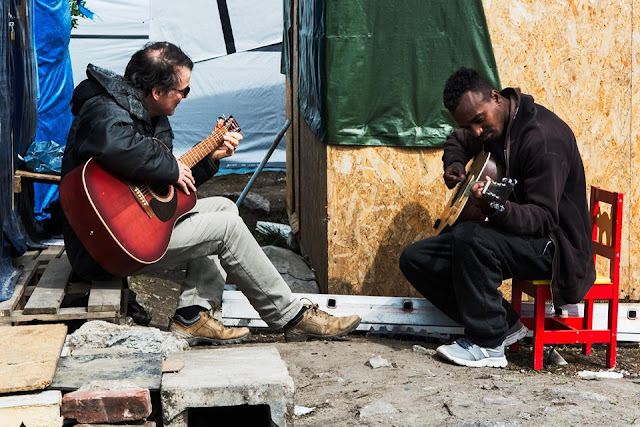