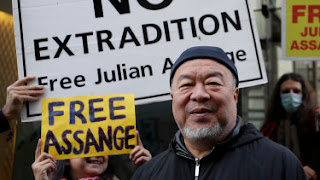 Julian Assange’s ‘crime’ has been to alert the world to the hideous crimes perpetrated against innocent women, men and children in the name of the USA and the UK.

He and Wikileaks published a video taken from a helicopter hovering over people in a Baghdad street in 2007. These included Reuters photographer, Namir Noor-Eldeen and his driver, Saeed Chmagh. Gunfire erupts from the helicopter. “Hahaha. I hit ’em,” shouts an American voice. Another is heard saying, “Oh yeah, look at all those dead bastards.”

A man is trying to crawl away. A van draws up and its occupants climb out and lift the wounded man. The helicopter opens fire again. The rescuers disappear in a cloud of dust. “Look at that. Right through the windshield,” one of the airmen cries exultantly.

Eleven dead, including two children. This was too much for Washington. Not the glee of the killers, not the slaughter, but the fact that Assange and Wikileaks inforrmed you and me of what was happening.

Now Trump’s USA want to put Assange into solitary confinement until he dies. There must be no more Assanges, no more Wikileaks, no more public knowledge of these war crimes.

Noam Chomsky has said, “Julian Assange has performed an enormous service to all the people of the world who treasure the value of freedom and democracy and who therefore demand the right to know whar their elected representatives are doing.”

Meanwhile when asked why the BBC has not been reporting on the extradition hearings at the Old Bailey, their Home Affairs correspondent, Daniel Sandford, says, “I have been in a few hearings and it is slightly repetitive.” Yes like the sound of those machine guns.

You can read daily reports from the hearing not from a BBC journalist, but from ex-ambassador Craig Murray here ....