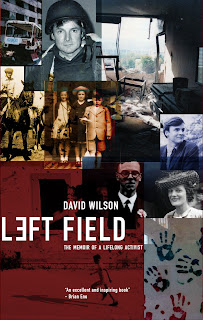 BRIAN ENO “This is an excellent and inspiring book. David is an adventurer and a freethinker, who, despite the best efforts of an education designed to equip him for obedient anonymity, somehow did something truly useful with his life. His stubborn and yet self-effacing commitment to his ideals carried him through many daunting situations, and his sense of humour kept him able to see the funny side.”


Destruction, death, hatred and war, but also hope, life, love and peace. A true story that takes you into a world of anti-war marchers and war criminals, celebrity musicians and shady art dealers. It moves from galloping horses in Argentina to ethnic cleansers in Bosnia. Music is never far away - A major theme - music as healer. You will meet Pavarotti and Clapton, Brian Eno, Bono and Bowie, as well as many who have found music to be a literal 'life saver'

My journey as a lifelong rebel began when my father, one of the first Allied doctors into Bergen-Belsen, showed me photos of the camp --- This terrifying awakening to fascism led me to a lifetime of political activism --- As co-founder of War Child, I helped set up a mobile bakery that fed the starving people of Mostar --- My connection with the Balkans had started with a tempestuous marriage to a Croatian, and ended with my becoming first director of the Pavarotti Music Centre in Bosnia, helping those traumatised by war through its music programmes.

Left Field has now been on sale for over three years in bookshops, as well as an e book and audio book. With the agreement of Unbound, my publishers, I am now making all 37 chapters free online. This edition has allowed me to include many more photos than appeared in the hardback edition. The final chapter was written by Anne Aylor who has been my companion for much of this journey. She has been my muse, editor and amanuensis.

Now go to LEFT FIELD chapter ONE
Posted by David Wilson at 22:10